skip to main | skip to sidebar

I honestly don't know where the past two weeks have gone, only that I've been really busy, really tired, dealing with a virus making it's way around the family for the second time in the past 2 months and did I mention tired?

So this, the weekend before our last tri of the season, Tim and I took a long weekend and brought the kids to Asheville. I'm getting to meet some of Tim's friends from college for the first time and we get to see the leaves changing in the mountains! Tomorrow is a first for me, a trip to Biltmore Estate. I'm excited. But today was a great family day...our first time going trick or treating with Ryan (and Brayden). Ryan has not gone before, for one reason or another, but tonight we met some of Tim's college friends with their son and another couple and went trick or treating. In the rain and cold, but by golly we did it. Ryan screaming to be picked up and wanting to "go home" the entire time, but we did it. Brayden throwing up in the car on the way home from too much sugar and still a little virus, but we did it.

Now I'm going to do something else, go to bed. Did I tell you that I'm tired? Got to get plenty of rest for B2B next weekend. I'll try to post some pictures of the boys soon.
Posted by Angela at 10:31 PM 1 comment:

Ryan absolutely loves to cook. So earlier this week when I asked him what he wanted mommy to make, he said "pumpkin pie, it's my favorite." Uh, mommy doesn't have the stuff for pumpkin pie right now, but I'll get some for tomorrow, what else do you want. "Pancakes." That's the default answer.

So I got stuff for pumpkin pie. Here's the best shot we got. 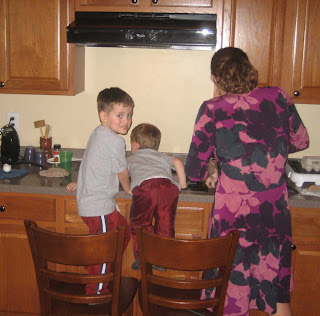 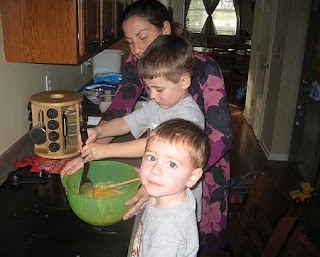 Ryan of course missed the bowl a few times when pouring ingredients in (as he just likes to wildly flip the measuring cup in the air without aiming) and Brayden didn't get the concept of stirring means leaving the spoon in the bowl...so a lot of the mix was all over the counter.

They both enjoyed fresh pumpkin pie after it cooked though. 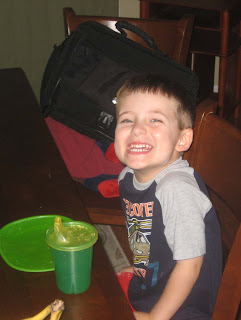 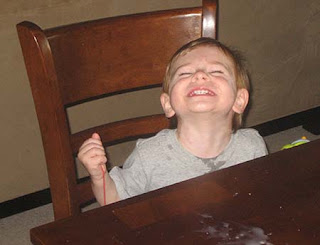 I've always heard women complain about their significant others or brothers or sons (what have you) leaving the toilet seat up. I can honestly say that I don't even need 1 hand to count the number of times it's been an issue since Tim and I have been together. Maybe once or twice in the middle of the night or something.

So I swore that I would teach the boys to put the toilet seat back down after peeing. And they both do. I say both even though Brayden isn't potty training, he still sits on the little training toilet on occasion and then puts the lid down when he sees Ryan do it. And Ryan, never misses a time. There's been instances where I'm trying to rush to get him to bed or get him dressed for school and he'll tell me "Mommy, wait...I have to put the top down slllloooowwwwllly, like this." As he inches the top down for 30 seconds so not to slam it down. I'm quite proud actually.

So if I don't have an issue with a 31 year old man, a 3 year old and a 17 month old, what's up with the ladies at work? Seriously, have you ever known a woman to put the toilet seat up after she's done using the restroom??? Well we have one at work. And until a few days ago, nobody knew who it was. We would all come out and say "are we sure the guys aren't going into our restroom." Is there a transgender female working here (my apologies if that offends anyone). But we just couldn't figure out why a woman would do it.

I mean most women are so picky about cleanliness in the bathroom that they use the toilet covers and use their feet to flush the dang toilet; so why would you touch the seat??? I don't get it. But last week I walked in the bathroom to find the stalls were full. The first one out, the new old lady (mid 60s), 5ft2 and frail looking...and what did I see, the toilet seat up. I found myself wanting to ask her why she does it. But I just thought it was inappropriate and ridiculous to even care about it. I don't know why it bothers me, but every time I see the seat up I think somebody with a penis has been in our restroom.

Just put it down...slllloooowwwlllyy.
Posted by Angela at 9:31 PM 1 comment:

It was one for the books I tell you. We were everywhere. It all started Thursday when I "worked from home" since they boys daycare was closed for a teacher work day. Let me tell you that not much work got done. Brayden left that night to go with his Nina and Papa to the beach (by himself) while Ryan got some mommy and daddy time.

Friday was traveling to Nashville (NC) and back to drop dogs off, picking up cars at the airport, packing for Pinehurst and socializing with neighbors...well at least Tim did. I headed to bed to try and get some sleep.

Saturday morning bright and early, time to head to Pinehurst for my Oly distance. Well it was more than that...seeing as how both the swim and the bike were longer than usual. The swim, not purposely (I hope) was about 2-3 minutes slow from what I can tell so whatever that translates into meter wise I don't really know. The bike, they extended to 30 miles, I'm guessing to get their own evil pleasure out of watching everyone suffer on what was already a hilly 25 mile course. The new 30 mile course was even hillier if you ask me. But I'm a hill wuss, so you probably shouldn't. And then there was the run. They reversed the course from years past, which seemed more difficult. If not for the extended bike, then due to the fact that there seemed to be more up hills in reverse if that's possible.

All in all, I'm very pleased with my effort on Saturday. It was painful, slow, painfully slow, but a good effort for me. I pushed as hard as I could on the bike through all the hills and then it took entirely too long to get my run legs. I think it was right at mile 3, maybe slightly before, that I started feeling ok. But those darn hills made me feel like a 75 year old decrepit woman, hunched over, swinging my arms violently from side to side at my waist line, just trying to get up the stinking things. I can say I didn't walk any on the run, because I was trying to get under 3 hours but I looked like I was walking I'm sure. Little did I know that the swim was long so my time was already blown. Oh well. Tim and Ryan were there to yell at me and I got to see Bri and Marty before the race. (Hopefully they'll be coaching me next year!) It was a nice day. Although I'm going on record to say that I will not race this course again, not even if they take the bike back down to 25 miles. It's just to hilly for me. Lovely ride and run, just too dang hilly. My efforts managed me 12/27 in my age group and about 72/196 overall women. Probably one of my better results in this series. It's more competitive than the other series we race.

The worst thing I saw was some guy passed out about 1/4 to .3 mile from the finish line. Pale face and lips, slightly shaking, out cold. EMT was just getting to him as I approached. I wanted so badly to ask them if I could just carry the guy the remaining 1/4 mile. That sucks to do all that work and then lose it that close to the finish.

We left directly from there to go to Topsail Island to see Nina and Papa and to rescue Brayden and cousin Madison (according to Ryan). It was almost 5 before we got there. Enough time to eat some food, take a shower and go to bed while everyone else watched football. Sunday brought a little more laziness, running in the waves and a 4 hour car ride home.

Now just under 4 weeks until B2B half. Crap I'm tired. I'm so jealous of everyone that's done and just enjoying being active for the sake of being active. I want to be lazy and eat peanut butter and marshmallow puff sandwiches while watching LMN all day in my pj's.
Posted by Angela at 5:51 PM 3 comments:

That's right, still two more races till my season ends and my mini vacation from sport begins. I've got Pinehurst Olympic distance this weekend. After which, Tim and I are driving to the beach to spend the remainder of the weekend listening to waves crash on an empty shore.

Then I've got 4 weeks until the B2B half IM. So it'll be a concentrated month of October with high hopes for the first weekend of November. I'm excited. I've set all kinds of crazy stupid goals for myself, I just hope I'm able to stay healthy and be strong on race day.

Off season looks like it's going to be "not so off" season, as I'm hoping to really kick my running, swimming and strength training up a notch. Not all at once though. I've decided after I take a few weeks rest, I'm going to focus just on running for about 3 weeks, then swimming for 3 weeks, then biking for 3 weeks. But what I really need is to get my strength training going again. I haven't lifted or done any since around Aug or Sep of 2005. Sad, but true. It's a mental thing with me, maybe I haven't felt good with my racing/performance because I don't feel strong because I'm missing that one piece. I don't know. Maybe I'm making excuses.

No more excuses, that's going to be a new year resolution...starting in November. Whatever, somebody's new year starts in November, right? I mean China's isn't actually January 1st. So I'm declaring my own new year. November (date to be determined), resolutions: no more excuses, no more sugar (candy), lots more Sugar (smooches), and first IM. Sounds like a good year to me.
Posted by Angela at 7:21 PM 4 comments: