skip to main | skip to sidebar

I remember when Ryan was about 9 months old (almost 5 years ago), we gave him a normal bath with bubbles, playing, giggling, hair washing and he went to bed happy. This next morning we woke up, as normal, played as normal and got ready for bath as normal. But this night, bath was anything but normal. Literally every time we tried to put water on his body, he screamed bloody murder. We tried to wash his hair and you would have thought the kid was having his arms and legs torn off. So we just stopped and put him to bed thinking it was just a weird situational thing.

The next night, the same thing...blood curdling screams. It went on for weeks, then months, then years. Bath time was only okay if no water got on his head or in his face. We tried goggles over the eyes, we tried laying down in the water to wet the head, we tried holding a towel over his eyes and face to keep it from getting wet. We tried everything and nothing worked...every night for 4 years was like this. Nothing traumatic had happened, there was no slipping in the tub or face down in the water so that he couldn't breathe. That's the first thing everybody always said "well something must have happened to him"....well it didn't. It was literally an overnight transition.

It was so bad that we couldn't really get him in the pool. He wanted to go swimming, but he was scared to get the water in his face or on his head. So about a year ago, almost as suddenly as it happened, he decided that he didn't mind the water "so much". He wouldn't get hysterical if water was on his head or in his face, he would just sort of hold his breath with his eyes pinched tightly shut until you wiped his face with a dry cloth. Slowly over the summer and into this last fall, he got better and better about it. When we went to the pool, he started telling us he wanted to go down the big water slide. The only problem is that kids aren't allowed to use the slide unless they are able to swim unassisted, there are no life vests allowed down the slide and no adult accompaniment. This is when Ryan started asking about learning to swim.

Tim and I tried teaching him basics, but he never really took to it. So about a month ago, we signed both boys up for swimming classes at the gym. It's only 1 day a week for 30 minutes, but we wanted to see how they would both do. Ryan is in a class by himself, only because no other kids signed up for that time slot, so he's really benefited for the 1-on-1 he's been getting. The first two weeks were a little awkward but he liked it. Proper kick technique, submerging the face, proper way to move arms in the water...and then week 3 something miraculous happened. At the end of class he did this: 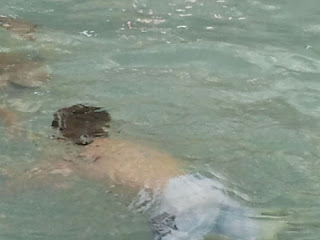 And he just kept doing it. Both he and I had the biggest grin on our faces and as I watched tears started welling up in my eyes. It was amazing to watch how excited and happy he was, how proud of himself he was...and I shared every bit of that with him. And since we've taken him back just to play, he's discovering that you can see people under water, he wants to sit "criss cross apple sauce" on the bottom, and he wants to live under water now. He wants to teach everybody else how to swim under water now. Being able to watch your child overcome a fear, be so happy and gain a world of confidence; it's just a feeling I can't describe.

This moment will be a still frame in my mind that I will be sure to remember in 16 years at college graduation, when I'm grasping to remember everything good I can when his life has passed by so quickly. And all of this over swimming under water? Slowly but surely, I'm starting to understand more of this thing they call parenting.

And this was class tonight...swimming unassisted. 4 classes...amazing, my son is amazing. 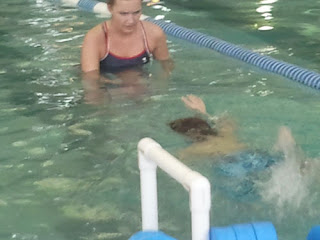 So an old high school friend of mine lives in Virginia and is a fitness manager for their local YMCA. She's a little over 1 year post baby no. 2 and it sounds like she's just starting to really get her routine down for exercise. She posted on Facebook that she has challenged herself to workout every day in February.

Now realizing that these sorts of ventures are hard to do when you're doing them alone, I told her I would join her...sort of an accountability thing. I know that it would be easier if we lived in the same town, but no such luck...so virtual workout partners will have to suffice. It seems she's already faced a few challenges due to unexpected family "things", but I think she's still on track...as am I! I believe the key for me will be my definition of exercise. Some days will be hard due to our daily schedule here, so I'm wondering if a hike at the nature park or playing ninja outside with Brayden for 1.5 hrs would count as exercise??? Somebody say yes so I don't feel bad.

Tomorrow I'm going to try for a "longer" run. So far I'm really only running about 25-35 minutes at a time with a 45 minute run being my longest some time in December. Hopefully I'll be able to get 45-50 minutes in tomorrow. I wish we had a closed track or indoor track at the gym that I could take Brayden to. Then he could ride his bike while I ran and I could keep an eye on him. There's really no track or trail around here set up like that. Since our treadmill is in the garage, I need to lean on Tim to get it fixed so that I can run while Brayden rides his bike or plays.

I've noticed that after each baby, the point at which I start to feel myself again seems to have a correlation to when I start cutting back on the breast feeding. So for the past week or two, I've started to feel better and better. I'm getting more sleep, I'm not exhausted all day, I'm not constantly stuffing my face with food and I'm still staying hydrated. Hopefully within the next few weeks this will prove to be the case and other than time, there won't be anything too big to keep me from fitting a regular workout in.
Posted by Angela at 1:36 PM 1 comment:

Settling into a routine

So now that the holidays are over and Ryan is back in school, we're starting to come into a small routine. I try to do something "educational" with Brayden after Ryan gets on the bus; letters, numbers, writing just to make sure he's getting some sort of exposure. Then it's to the gym for a little mommy exercise and time for Brayden to go crazy in the "jungle gym" with other boys. We don't do that every morning but when we do go it has to be early so that Gabby doesn't hit that wall.

When we're not at the gym we have days for the park, the library story time or at a bounce house if the weather is bad. We've now got soccer on Friday mornings so our days are getting more structured. Time at home is occupied with pretending to be ninjas fighting the "boneheads" and "snakes" from Ninjago, playing freeze tag, hide and seek or riding bikes and going for walks. Our morning are packed.

After lunch, the kids are down for quiet time and that's when I normally get house work and laundry done. Now that I've gotten to a place where I'm "caught up" on those chores though, I don't have to do stuff every day, so it's nice to have a day or two a week that I can chill out, read, watch tv or even nap ;) Afternoons are "free play" so to speak, getting Ryan off the bus and then dinner.

It all sounds so easy and relaxed but it can be slightly hectic on a daily basis. Brayden just has so much energy and our day really all depends on how Gabby is doing with naps and eating whether our days really go smoothly or as planned the night before. I can't complain at all though, I'm having a great time with the kids and can't think of anywhere else I'd rather be right now. I don't miss working, only a bit of adult interaction; but I am getting to know some of the other at home mommies in the neighborhood with kids our age, so hopefully this should get more social for me as well as the kids.

The other thing I've noticed, is now that I'm getting more quality time with the kids, I'm much more willing to leave for a night out with Tim...I think this makes us both much happier. Life is different but good.
Posted by Angela at 2:54 PM 1 comment: